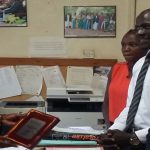 The School of Law was the runners up in the 2016 International Humanitarian Law Moot Court held at the Silver springs Hotel recently. The Moot is organized by the International Committee of the Red Cross (ICRC).

The winning team that comprised of Mr. Edwin Mugumya LLB IV, Daniel Nasasira LLB.IV and Gloria Mutesi LLB III presented the Trophy to the Ag.  Principal School of Law Dr. Damalie Naggita Musoke at an event witnessed by Dr. ZaharaNampewo, who was the coordinator of the moot yesterday.

While receiving the Trophy on behalf of the Law School and the entire University Management, the Ag. Principal School of Law Dr. Damalie NaggitaMusoke congratulated the team for flying the flag of the University High.

She said it’s not enough for Law students to attend classes and get out of the University gates with Degrees, but rather it is an added advantage for such students who engage in other co-curricular activities like Moots, which she said exposes them to a number of opportunities that are relevant both to professional as well as social life.

Dr. Naggita noted that all the Law students need to be encouraged to take part in the Moot activities in order to expand their learning avenues and gain exposure as well.

Dr. ZaharaNampewo who is the Ag. Director Human Rights and Peace centre who coached the students in the moot court preparations said although the team was  runner up, they exhibited their best and theirs was a very good team of three.

She said despite the limitations in the support given to them, the students put in all effort in preparing for the moot competition, citing the fact that some of them had not yet studied International Humanitarian Law.  She said learning from experience where all the moot students were fourth years, it was found necessary to include a third year student on the team for continuity.

She said the School of Law supported the students in as far as coaching, printing materials, books as well as wifi and that despite the limited time available for preparation and other challenges faced by the students, they did a good job.

On their part the students commended the School of Law for enabling them take part in the Moot. Mr. Nasasira Daniel who emerged the best oralist said he had benefited from the moot in terms of sharing knowledge, gaining exposure to the practical aspects of the law that helped him apply some of the substantive elements of Law in a procedural manner. He said throughout the competition, the Makerere University team was viewed as a pace center and that despite coming up second, they did their best.

Ms. Gloria Mutesi who said she had not yet studied International Humanitarian Law said her participation in the moot gave her an opportunity to read about ahead of time, gained exposure in the language, gestures and other practical elements for a person appearing before court, which she said will influence the res t of her professional life.

Mr. Edwin Mugumya recommended that all student in Law School should be exposed to Mooting given the practical nature of learning. He urged the leadership of the School to step up the support like other Universities.