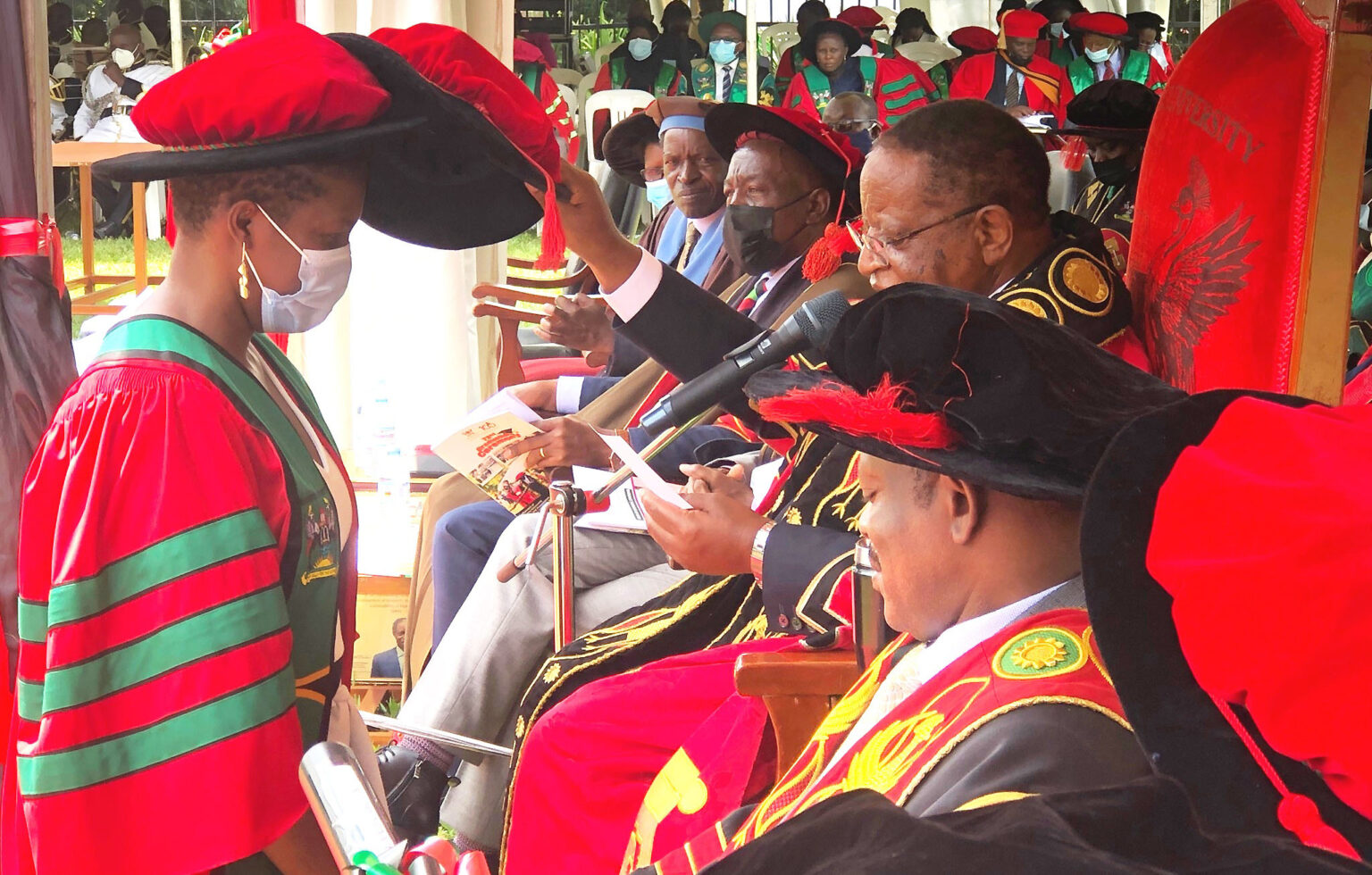 The School of Law presented graduands on the first day of Makerere University’s 72nd Graduation Ceremony held on the 23rd May 2022 at the Freedom Square.  A total of 307 graduands were presented by the School including (1) Doctor of Laws, (18) Master of Laws and (188) Bachelor of Laws.

On the same occasion, Ms. Caroline Adoch made history as the first woman to be awarded the Doctor of Laws (LL.D) of Makerere University. Master of Laws were awarded to 9 females and 9 males while the Bachelor of Laws awardees were 70 female and 118 male.19 Bachelor of Laws graduands attained Second Class Upper division, Mr. Ndobya Gerald emerged the best student with a CGPA of 4.18.

Speaking to the congregation, Professor Barnabas Nawangwe – Vice Chancellor, Makerere University welcomed everyone to the 72nd Graduation noting that this is a special graduation because the University is celebrating 100 years. He also thanked His Excellency the President of Uganda, Yoweri Kaguta Tibuhaburwa Museveni and Hon. Janet Kataaha Museveni – First Lady and Minister of Education for honoring the invitation to officiate at the graduation celebration during the centennial celebrations of Makerere University. The Vice Chancellor highlighted that despite the disruptions occasioned by Covid-19, Makerere University is on a steady course of transforming into a research-led university as a result of the support from government and development partners. Professor Nawangwe commended government for the UGX30 billion allocated annually for the last three years towards the Research and Innovations Fund which has transformed the University tremendously. He added, ‘thanks to investments by Government of Uganda, through the PRESIDE Initiative, Makerere University now boasts of some of the best laboratories globally in the areas of human medicine, veterinary medicine and nanotechnology’. Prof. Nawangwe invited graduands, parents and guardians to contribute to the Makerere Centennial Celebrations.

The Chairperson – Makerere University Council, Mrs. Lorna Magara in her remarks congratulated graduands and parents on their achievement of completing their studies. Mrs. Magara commended government for the support given to Makerere University for the multiple infrastructural developments including reconstruction of the Main Administration Building destroyed in a fire in 2020. The Chairperson of Council also presented a plaque and certificate to Professor William Bazeyo, former Deputy Vice Chancellor – Finance and Administration for the diligent and dedicated service to Makerere and Uganda.

In his remarks, Professor Ezra Suruma – Chancellor, Makerere University congratulated graduands upon making it to the 72nd Graduation Ceremony of Makerere University. Prof. Suruma expressed his appreciation of His Excellency the President and First Lady/Minister of Education and Sports for the continuous support extended to Makerere University, requesting the congregation to join him and give them a warm applause. ‘I wish to recognize the efforts of the staff and faculty for the excellent work done to prepare the students graduating today’ he added. The Chancellor pleaded with the graduands to never forget to cherish and to honour parents, guardians and sponsors who have sacrificed so much for them to reach this graduation day.

President Museveni re-echoed the importance of science in development explaining the decision of government to give good salaries to scientists including science teachers in universities and secondary schools. ‘This is not because we have forgotten the social scientists, arts people but we can’t handle all at a go’ he said. The President added that science is the basis of social economic transformation and a trigger of social change; he appealed to Ugandans and social scientists to understand this. President Museveni congratulated Makerere University on the 100 years of existence and all the achievements accomplished.

In her remarks, Hon. Janet Kataaha Museveni congratulated Makerere University on her centennial celebrations. She also congratulated the graduands for accomplishing their studies applauding the parents and guardians for supporting the students noting that it is sacrifice. Hon. Kataaha Museveni reiterated the government’s commitment to supporting Makerere University in her endeavours.

During the 72nd graduation ceremony to be held from the 23rd-27th May, 2022, a total of 12,474 students will be awarded degrees and diplomas in various disciplines. Of these, 100 will receive PhDs, 1,236 Masters Degrees, 140 undergraduate and postgraduate Diplomas, and 10,998 Bachelor’s Degrees. 52% of the graduands are female and 48% are male. Besides the School of Law, the Colleges of Health Sciences and Natural Sciences also presented graduands on the first day of the 72nd Graduation Ceremony.