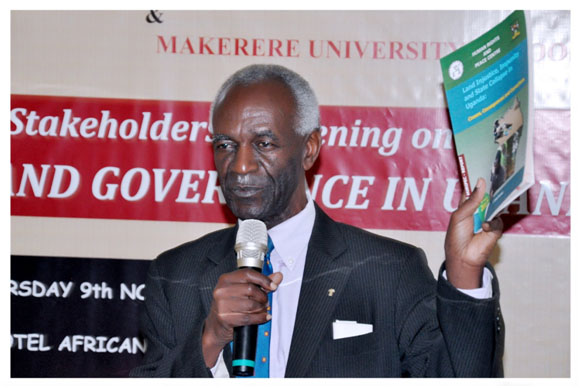 The Human Rights and Peace Centre (HURIPEC) recently convened a National Stakeholder’s Dialogue on Land Justice and Governance in Uganda at Hotel Africa. The Dialogue was aimed at raising public consciousness about governance issues in as far as land is concerned.

The report is a culmination of four studies related to three empirical studies undertaken by the Human Rights and Peace Centre, (HURIPEC) at the School of Law Makerere University.

Justice James Ogola, in his remarks said Land in any country and particularly so in Uganda is the umbilical cord that binds together, the living the dead and the unborn and therefore an issue of national importance.

He said similar dialogues are in the pipeline to address similarly important governance issues in the country by a cross sections of stakeholders that include the interreligious council and CCEDU.

He commended HURIPEC and the academia for taking the lead in identifying issues that need to be placed on the agenda for citizenry national conversation.

He said basing on the agenda, the participants, the aims and objectives of the conference, the people of Uganda,and acting as a collective entity aim to address issues of national importance critical to nation building. He said in order to do this and to avoid addressing symptoms rather than causes, there was need to deliberate on what happened in the past, which could explain the present situation in Uganda.

The Retired Chief Justice recalled a number of other issues that have not been debated with a view of addressing the ills citing the example of the 1966 invasion of the Kabaka, when the government of the day stormed the palace and spilt blood and the owners have never forgiven until today.He mentioned the year 1967 when the government of the day changed the constitution and passed bills in a few hours, the 1971 the grand coup by Idi Amin Dada that was characterized by assassinations, of the chief Justice and other public figures. Further he mentioned the 1980s when afterelections ,some peoplewent to the bush, followed by the numerous sculls in Luwero triangle as well as the  twenty five year genocide in the greater north of Uganda.

The chief guest noted thatdespite the occurrence of such incidences and a lot more that happened in the history of Uganda, the citizens have continued to put heads in the sand and lead life as usual.  He explained that it is because of such unhealed wounds that we were experiencing symptoms such as the attempts to make changes in the constitution yet it took a lot of time and effort to put together.

In relation to the land question, he said land as a key resource for national development is central and has  therefore faced a complication of systems that include a bloated land tenure system, the judicial adjudication of land issues which is so enormous, time consuming  and frustrating,  coupled with the insidiouscorruption, the cascading hills of case back logs, the intrusion and the impunity with which the executive invades the courts of law on land matters citing the involvement of the state house and the Resident district commissioners.

Justice Ogola commended Government for theefforts made on the land compensation bill despite the clumsy attempts through constitutional amendments to oust justice, equity and the rigors of due process on the formula of land compensation that is well known the world over. He said if there is any amendment, it should be open and a pride to all.

The Ag. Deputy Principal School of Law Dr. Ronald Naluwairo on behalf of the school of Law welcomed all to the National Dialogue on Land Justice, Governance and Law, more especially the chief guest Justice James Ogola, and the Minister of lands, Housing and National Development, Hon. Betty Amongi for gracing the occasion.

‘Part of our mission at the School of Law is to promote social justice in the teaching, research and stakeholder engagement on contemporary legal issues’ he said.

Dr. Naluwairo said the School of law is making all effortsto remain relevant and has therefore increasingly moved away from the theoretical to more action based research that informs policy making processes such as promoting social justice, promotion of human rights , the rule of law and democracy in Uganda. He said the research on land justice in Uganda is one of such studies done by the School of Law, and commended the HURIPEC Director, Dr. ZaharaNampewo for spearheading the initiative and the partners like OSEA for the financial support.

He urged governed, through the representatives in the conference to listen to the voice of reason since the academics, researchers, policy analysts have tried to provide evidence based analysis and solutions to many governance issues.

According to Dr. zaharaNampewo the Ag. Director HURIPEC, the results of the studies were validated in the four study regions and that the report was an effort to bring to higher levels the discussions of emerging issues and an effort to create public consciousness about governance issues.

She said the study took cognizance of the historical dimensions, like the 1900 Buganda Land agreement that led to the landlord tenant relationship a situation that has not been resolved to date, with the fundamental contradictions in the land laws not resolved. She said the Land question manifests in legal, administrative and political issues. The law creates multiple interests on land and an apparent grey area as to who takes precedence in the land the state or the people. She pointed out that the issue of the land tenure system namely freehold, leasehold, customary and mailo creates different interests on land and even relegates customary tenure as less recognized.

A report by Harriet Musinguzi