Home - Uncategorized - The Society For Justice And National Unity Launch 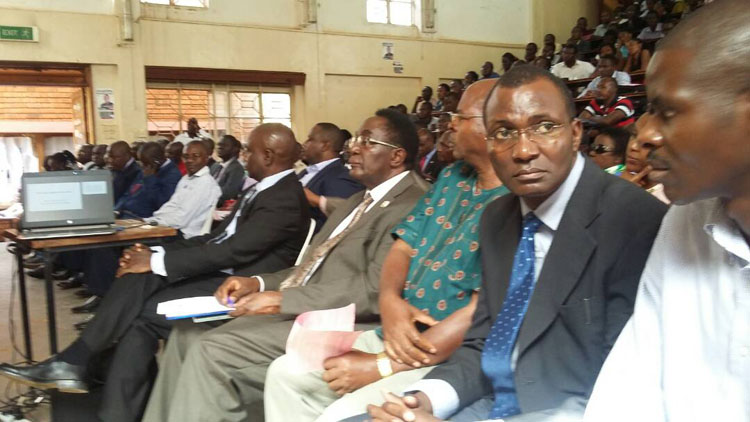 The Society For Justice And National Unity Launch

The Society for Justice and National Unity (SOJNU) has been launched. The event officiated by the Vice Chancellor Makerere University, Prof. John Ddumba Sentamu brought together renowned Academics, Politicians, civil society, students and the public that turned up to witness the launch and be part of the Symposium on the topic’ Who Owns Uganda’s Economy’ at the School of Law last Thursday organized in collaboration with the Human rights and Peace centre (HURIPEC).

In his remarks at the event, Professor John Ddumba Sentamu said he was glad to be associated with the organization that not only is in line with the University’s mission of promoting research, innovation and teaching but also putting forward the old age agenda of a University being at center stage for holding such academic discourses on matters of national importance.

‘It gives me great pleasure to attend this symposium which is focused on the important question regarding “Who owns Uganda’s Economy?” It is important to note that Makerere University as a premier public university is acenterfor research, innovation, teaching and all manner of intellectual public debates and engagements, he stated.

He noted that whereas Makerere University has for a long time hosted seminars, public debates, and carried out community outreaches, there may not have been a sustained culture of intellectual engagement in an organized manner on matters of the economy, politics, development, culture and other social issues.  He expressed gratitude to the minds behind The Society for Justice and National Unity, forbringing together intellectuals from varied backgrounds andsenior members of Makerere University who have organized themselves together with thecivil society for purposes of intellectual engagement in this area.

While addressing himself about the objectives of the association, Prof. Sentamu noted that these were important areas which intellectuals, academicians and all Ugandans who seek to expand the frontiers of knowledge and the search for practical solutions to society’s problems should support and emulate.

The symposium co organized and hosted by the Human rights and Peace Centre, School of Law School which is at centre stage in the promotion of respect for Human Rights in Uganda and at the region.According to the Interim executive chaired by Prof. John Jean Barya, SOJNU was formed with the objectives of bringing together intellectuals, organized civil society and other Ugandans interested in social justice and national unity; to provide a forum for intellectuals, organized civil society and  all Ugandans that are interested in the promotion of social justice, equity, inclusive development, unity in diversity and the sovereignty of Ugandans and Africans in general; to carry out research and disseminate findings aimed at achieving the above objectives;to provide a forum for debate on all matters of national interest and interests of the people of Africa; to encourage active citizenship and to carry out such other activities as may be determined from time to time by the Society.

Prof. Barya said the overall guiding principle for the association is“social justice, public good, unity in diversity, national sovereignty and inclusive development.” In this regard, The Society for Justice and National Unity will also conduct periodic seminars within Makerere University as well as other universities both public and private. Research will also be undertaken in the areas of the economy, democracy, human rights and other issues which are all intended to promote “social justice, equity, inclusive development, unity in diversity and the sovereignty of Ugandans and Africans in general”

Dr. Fred Muhumuza, a Lecturer in Economics in the College of Business and Management Studies (COBAMS) presented the paper “Who owns Uganda’s Economy”  while the discussants were drawn from political parties, KACITA, Parliament, the Cabinet Secretariat, Oxfam and SOJNU itself, under the moderation of Mwambusa Ndebesa.