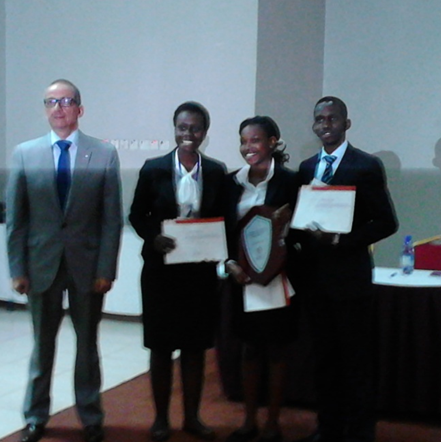 The Competition, which was organised by the International Committee of the Red Cross (ICRC), was held from 28th September to 1st October, and involved Five Universities, including the Uganda Christian University, Nkumba University, the Islamic University in Uganda and Kampala International University.

Makerere University was represented by Simon Ssenyonga, Anne Tendo and Rachel Kobusinge, who each won 750,000 Uganda Shillings worth of shopping vouchers. They will also be representing Uganda at the 15th All Africa International Humanitarian Law Moot Court Competition from 14th to 21st
November in Arusha, Tanzania.

The Uganda Christian University, which emerged Runners Up, also won a quiz which was held during the Competition, and had the Competition’s Best Oralist. They each won 500,000 Uganda Shillings worth of shopping vouchers.