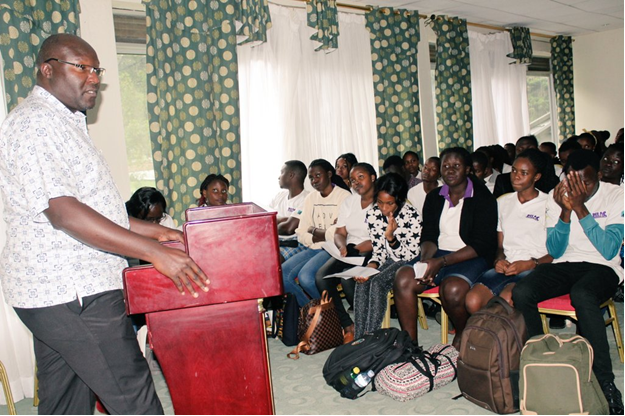 At the first CLAPMOC students retreat held at Garuga Resort hotel on 8th November 2019, Law students were advised to keep conscious of the social justiceneeds of the indigent in the course of their career if they were to make meaningful contribution towards the society.

Dr. Ronald Naluwairo, while addressing the students under the Community Law and Mobile Clinic (CLAPOMC) commended their level of commitment towards supporting the provision of legal services to the poor communities surrounding the University.

“The School of Law is very proud of the work done by the CLAPMOCstudentsthat serve themarginalized people and in turn making a practical input into their legal education’ he said, adding that because of this, the School of Law was getting positive feedback from  various stakeholders.

He said one of the objectives of the school of Law was to reach out and promote social justice and rule of law hence the relevance of activities undertaken under the program. He urged the students to make good use of their time and exposure while on the program to gain from the experiencethrough enhancing their knowledge and skills and appreciate the needs of the poor and vulnerable, who will be some of their clientele in future.

“This is an experience that you should not take for granted. Make maximum use of your time while on the program to make the most out of it, he said, adding that during their time at Law School, there were no such exposures for undergraduate students.

Dr. Naluwairo noted that the world was increasingly getting very competitive more so at employment. ‘You should be proud that while a student, you have had this opportunity to deal with real issues” he added.  He said increasingly manyorganizationswant people that have served as volunteers in service to society which opportunity the students got while on the CLAPMOC program.

Further, the students were encouraged to enhance the writing and analytical skills as well as, drawing from their experiences in the work they were doing, which could be a way of  sharing experiences in a number of media including newspapers. In this way, he said, the students would raisetheir profile as individuals given that something written adds value to the authors.

While sharing their experiences on the CLAPMOC program, Kenneth Kiapi one of the beneficiary students highlighted the activities the students were involved in and they included community outreaches, Prison outreaches, training prison warders and community paralegals as well as conducting Radio talk shows among others.

“PILAC saved me from a retake through daily interactions in the outreaches’ he added, saying that the experience on the program made the studentsbecome very valuable and skilled future employees.