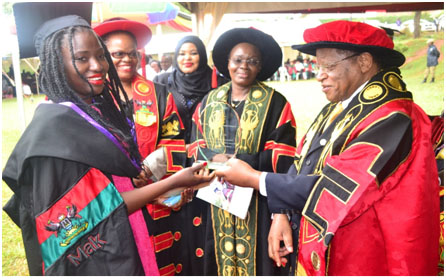 The best performing male and students from the Law programnamely Bazzekuketta Derrick (CGPA 4.02) and Ruth Mirembe(CGPA 3.74) were awarded prizes by Uganda Law Society and FIDA respectively.
The Chancellor Makerere University  Prof.  Ezra Suruma  recognized  the contributions of various institutions and organizations towards the University notably, the Government of Uganda, the Makerere University Council, the Senate, the students, the development partners and all stakeholders, especially the parents, for the vital role played in supporting Makerere University to pursue its monumental educational vision of academic excellence and innovation in Africa and beyond.

The Chancellor commended the spirit of hard work, endurance and  self-control that has brought the graduands this far.“The degrees we are awarding you today testify to the hardships, the discipline, the commitment, the pain and the tears you have shed over the years and decades of academic struggle. Your graduation testifies to the world that in the face of all adversity, poverty, deprivation, doubt and danger, you possessed the determination to strive on, to rise after the fall and today you are counted among the survivors, the heroes of intellectual battles”. Prof. Suruma

Prof. Suruma also appreciated the academic, administrative and support staff whose guidance has helped to bring  graduands to this day. He told graduands that Makerere University staff had done their part to guide them through the complexities of academic life. He challenged graduands to be ethical, creative, think critically  and be problem solvers.

In his remarks the Vice Chancellor, Prof. John Ddumba Sentamu while congratulating the graduands commended the parents for choosing to educate their children at Makerere University adding that there are a number of changes going on in terms of academics for instance the restructuring of academic programs as well as infrastructural developments.

He pointed out that the School of Law exhibited professional involvement in issues of national interest when nine Academic staff successfully engaged the Supreme Court in an amicus curiae (“friend of court”) application,where the law allows courts to listen to persons who may not be parties to the case but who have expertise to advise the court on how best to resolve cases. The Court underlined the fact that justice, according to the Constitution, is administered in the name of the people and people should be allowed to participate in judicial proceedings. The Court also acknowledged the team’s internationally renowned expertise on matters of democracy, human rights and elections. This also became a practical learning experience for the law students. We sincerely congratulate the School upon this landmark achievement.

At this 67thGraduation a total of Fourteen Thousand, Four Hundred and Ninety Seven (14,897) students were awarded degrees and diplomas of Makerere University. Of these, 45.9% are female and 54.1% are male graduands. Seventy Five (75) are Doctoral students of whom 24 are female and 51 male.

In his speech at the opening of the graduation event, the Prime Minister Dr. RuhakanaRugunda, congratulated all Graduands upon reaching this important milestone in their lives andrecognised Parents, Guardians and Sponsors upon a job well done.

The Premiere said that government was appreciative of the role that Makerere University plays in training vital human resources for the region despite the many challenges the institution was facing. He expressed government commitment in solving Makerere University’s problems, citing the effort by His Excellency President Yoweri Museveni in appointing the Visitation Committee led by Dr. Abel Rwendeire to inquire into the affairs of Makerere University.

“We recognize that we need to pay regionally competitive wages in order to attract and retain quality academic staff. We therefore remain committed to increasing the salaries of staff in public universities. Despite severe constraints in the national budget we shall progressively increase staff wages until the salary level which His Excellency the President promised you has been achieved”. The Premier said.

He reported that Government secured a grant through the African Development Bank to fund the infrastructure and laboratory construction and renovation at Makerere University and other public institutions. He appealed to the University Management to ensure that all construction works remain on schedule.

In June 2016, the Prime Minister told the congregation that Government established a committee to review Makerere University’s Fees Policy which has successfully completed its work after receiving contributions from both students and stakeholders. He urged all parties to continue abiding by the new Fees Policy in order to ensure financial health and sustainability of Makerere University.

“I also want to urge all our students and staff to embrace dialogue at all levels as a means of solving conflicts. I urge the University community to endeavor to be a prime example of peaceful dialogue and solutions as opposed to violence and industrial action. I appeal to you all to uphold personal and institutional integrity and to treat one another with respect and humility”, Dr. Rugunda advised.

Dr. Rugunda also said Government was fully committed to supporting the youth to advance their careers through various programmes, initiatives and innovations. He cited the launchof the Young Achievers Awards 2017, on 23rd January, 2017which was organized under the theme of “Rewarding Innovation and Excellence and Inspiring the Next Generation of World Leaders”.  He added that Government supports and appreciates such initiatives by the youth to develop, mentor and enhance the skills of youth through innovations.